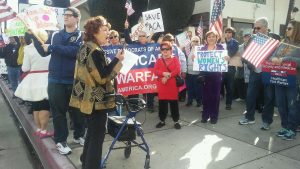 I think one of our nation’s commentators said it best: “The marchers demonstrated what they want their President to be – respectful, informed and unified”. All over the world, with the exception of Seattle, the same decorum was observed. Friends from Hemet in Washington, DC attending the Women’s March commented how polite, orderly, and respectful all their fellow marchers were. Our own local March in Hemet attracted almost 100 people which was extraordinary in itself but even more so as a number brought their own signs made at home. Our Dem club had made lots of signs the last few days and all of them were used. A reporter who witnessed the Hemet March agreed that the participants were very polite, did not stop traffic when crossing the streets during their March, and helped one another when necessary. I am so proud of Women, aren’t you?