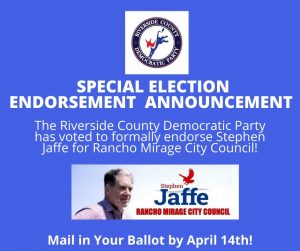 The Members of the Riverside County Democratic Party have voted to endorse Stephen Jaffe for Rancho Mirage City Council!  Mr Jaffe is an attorney,  an advocate for the mentally ill and their families, and a supporter of animal rights.  He currently serves as National Legal Counsel for the American Federation of Aviculture, provides volunteer legal service fo the Animal Legal Defense Fund, and is the incoming Vice President of the Democrats of the Desert.

Legal scholars will know his work on the landmark Chadam v Palo Alto Unified School District, the landmark lawsuit that established his young client, a person who is carrier of a genetic marker for a certain disease, as a part of a protected class under the ADA.

To learn more about Mr Jaffe, and volunteer on his campaign, please contact him at: jaffe4citycouncil@gmail.com

The City of Rancho Mirage General Municipal Election will be held April 14th!

All ballots will be mailed to Rancho Mirage voters. Ballots can be returned by mail, dropped off at the Registrar of Voters (2720 Gateway Drive, Riverside, CA 92507), or dropped off at Rancho Mirage City Hall (69825 Highway 111, Rancho Mirage, CA 92270) by 8pm on April 14th. The last day to register to vote for this election is March 30th!

Let’s get the vote out for Stephen Jaffe, the Democratic voice for Rancho Mirage City Council!